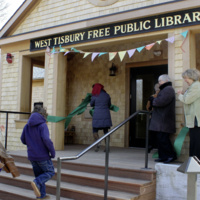 The West Tisbury Library was founded in the same year as the town of West Tisbury itself: 1893.  The library has been relocated, rebuilt, and expanded a number of times. The current building, across from Alley's, was completed in early 2014.

Island resident and photographer Elliott Bennett’s images of the natural world will be on display in the Community Room of the West Tisbury Library for the...

Come join the West Tisbury Free Public Library and MV Family Center for a weekly playgroup designed for all ages! Toys, art supplies and books will all be...

All are welcome to join the West Tisbury Library’s Knitting Group on Tuesdays at 5 p.m. Join librarian Lyn for a relaxing hour of creativity and...

Children’s librarian Mikaela will be hosting a weekly traditional storytime. Families will be able to listen and enjoy books new and old with some songs...

This was great-just what I needed for physical activity and a mental health break. The combination of different segments with changes in music made the hour go quickly. The instructor provides easy to follow directions which were helpful since this was my first time in this dance class. Thank you for this free class.