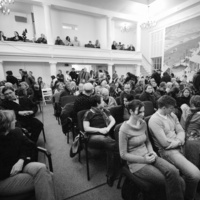 Located on the second floor of the Tisbury Town Hall, the Katharine Cornell Theater is named for a well-known stage actress who lived on the Island until her death in 1974 and whose estate helped finance the theater's renovation. Decorated with striking murals by Island artist Stan Murphy depicting scenes from Vineyard history, the theater hosts a variety of meetings and events, including concerts, films, lecture series, and plays.