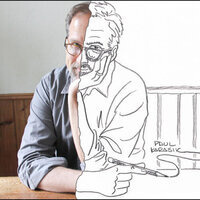 SOLD OUT - Tuesdays in the Newsroom: Being Paul Karasik

Paul Karasik, whose cartoons appear regularly in The New Yorker, Martha's Vineyard Magazine and the Vineyard Gazette, talks about his process and inspiration. An educator as well as a cartoonist, Mr. Karasik teaches at the Rhode Island School of Design and gives lectures and workshops nationally about how to make comics and how to understand them.

His latest work, "How To Read Nancy" (cowritten with Mark Newgarden), is a deconstruction of a single NANCY comic strip to reveal the hidden language of comics. It  won an Eisner Award for "Best Comics-Related Book".

Vineyard Gazette readers will be familiar with his delightful graphic reports, which illuminate hidden corners of the Island using a comic-strip format. His humorous takes on the Vineyard are featured in "One Last Thing" at the back of every issue of Martha's Vineyard Magazine.