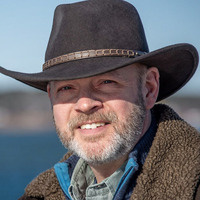 Tuesdays in the Newsroom: Man of Mystery

Edgartown police Sergeant Jamie Craig, the son of beloved Vineyard mystery novelist Philip R. Craig, will talk about his late father's prolific writing career and the Hallmark channel movie series based on his books. The series debuts Sunday, Jan. 12 at 8 p.m. with an adaptation of A Beautiful Place to Die, the first of Philip Craig's 19 Vineyard mysteries featuring unlikely hero J.W. Jackson.

Jamie Craig could be the hero of his own series. A former Navy helicopter pilot and 26-year police veteran, he serves as commander of the Island's SWAT team. Like his father, who taught for English for many years at Wheelock College, Sergeant Craig is a born educator and now offers active shooter training sessions for organizations throughout the Vineyard.

Doors open at 5:15 p.m. for a brief reception, followed by an interview and Q&A with Sergeant Craig.

Tuesdays in the Newsroom is a monthly speaker series sponsored by the Vineyard Gazette in the off-season for people interested in more engagement with newsmakers.