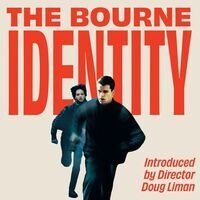 This is the film that made Matt Damon an action film star. He plays a mysteriously dangerous amnesiac, on the run as he tries to figure out how and why he lost his memory. Fished out of the Mediterranean, he finds his way to Switzerland and then Paris, searching for answers and eluding assassins along the way. A relentlessly paced, kinetic thriller from director Doug Liman (The Wall, Edge of Tomorrow), the film also stars Franka Potente, Chris Cooper, Clive Owen, and Julia Stiles.