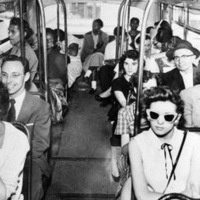 Plus Q&A with co-Director Morna McNulty.

The purpose of this film is to capture and preserve the rich oral histories of an aging and diminishing population of African Americans who 1) grew up in the Mason/Dixon border area of Baltimore, and 2) who lived through the era of legal segregation in the Jim Crow south. The narratives will document the relevant lives of seven prominent Baltimore figures who attended segregated schools and/or desegregation before and following the 1954 Supreme Court Brown v Board of Education ruling. While our society has become more ethnically and racially diverse inequalities persist, including a return to increased school segregation and poverty. Notwithstanding, the topics of segregation and desegregation are often skewed towards the glorification of racial harmony and oversimplification of widespread national change. Whereas 21st century research proves desegregation to be unsuccessful, as evident in the overwhelming number of racially segregated schools and neighborhoods today, the stories told in this film are nevertheless an important introspection into the lives of living history. As film co-director/co-producer Morna McNulty suggests, “We have to re-examine where we’ve been in order to re-imagine where we are going. Voices of Baltimore represents the collective voices of a people whom history too often overlooks.”