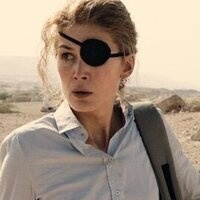 SOLD OUT - MVFF: A Private War

Celebrated war correspondent Marie Colvin (Rosamund Pike) is as comfortable downing martinis with high society as she is brazenly staring down warlords and fleeing gunfire. Driven by an enduring desire to bear witness and give voice to the voiceless, she charges into danger, constantly testing the limits between bravery and bravado. Based on the extraordinary life of Colvin, who died while reporting from Syria in 2012, this is the narrative feature debut from Oscar-nominated, Emmy-winning MVFF alum Matt Heineman (Escape Fire, Cartel Land, City of Ghosts).