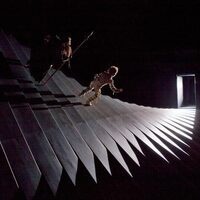 Robert Lepage's stunning production of Wagner's Das Rheingold, the first of the four operas known as "The Ring of the Nibelung." With Bryn Terfel as Wotan, Eric Owens as Alberich, and Stephanie Blythe as Fricka. James Levine conducts the mesmerizing score. Filmed live at the Metropolitan Opera in 2010.

Played without intermission, the opera runs 2 1/2 hours. All adults are welcome.