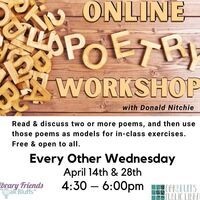 Where we read and discuss two or more poems, and then use those poems as models for in-class writing exercises (which are then read out loud but that is optional). Artists have their life drawing classes—why can’t writers have a similar kind of thing?

Poetry Drop In is geared for everyone, beginners and those who have been writing for a while. They typically last an hour and a half.

Led by Donald Nitchie. Mr. Nitchie has an MFA in poetry from Columbia. His book of poems Driving Lessons was published in 2008. His poems have been published in local periodicals, and he has occasionally led writing workshops on the Vineyard since the late 1980s.