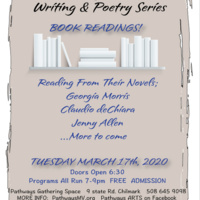 This week's Tuesday Writing & Poetry Series is dedicated to readings of excerpts from new novels by local writers.

Georgia Morris reads from her new novel, American Torrent. Ms. Morris is a member of the Writers Guild Of America. Her work has been broadcast on ABC, NBC, PBS, HBO and TNT. She has written most projects for Galen Films and is the Co-Director of Rescuing Emmanuel and The Same Heart.

Claudio de Chiara reads from a story of his father in law, Mehmet Demir, set in Turkey.