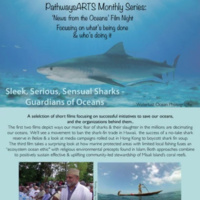 News from the Oceans Film Night

A selection of short films focusing on successful initiatives to save our oceans and the organizations behind them.

The first two films depict ways our manic fear of sharks and their slaughter in the millions are decimating our oceans. We'll see a movement to ban the shark-fin trade in Hawaii, the success of a no-take shark reserve in Belize and a look at media campaigns rolled out in Hong Kong to boycott shark fin soup. The third film takes a surprising look at how marine protected areas with limited local fishing fuses an "ecosystem ocean ethic" with religious environmentak precepts found in Islam. Both approaches combine to positively sustain effective and uplifting community-led stewardship of Misali Island's coral reefs.