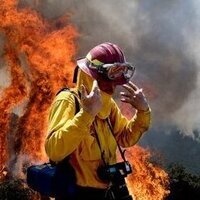 The planet is in crisis, and scientists agree that humans are to blame. In Chasing Ice (MVFF 2012), James Balog transfixed us with his time-lapse photography of melting glaciers in the Arctic. This stunning new film finds him closer to home, capturing the lives of Americans on the frontlines of climate change: coastal communities threatened by the rising sea, children suffering from air pollution, firefighters up against record-setting infernos, and coal miners tunneling out of a dying industry.