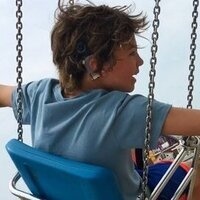 Irene Taylor Brodsky builds on her moving first feature, Hear and Now (MVFF 2007), by delving into an intergenerational exploration of living with deafness. Brodsky’s son Jonas began losing his hearing as a baby and underwent cochlear-implant surgery as a toddler. Now 11 years old, he has adjusted to a world with sound. Brodsky’s parents also have cochlear implants, but the majority of their lives, unlike their grandson’s, has been shaped by silence.