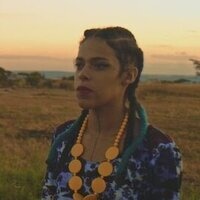 Inspired by blogger Juliana de Faria’s campaign of the same name, this film spotlights an issue many men still don’t bother to ponder. It exposes the culture of catcalls women endure daily in São Paulo, Brasília, and other parts of Brazil. Seeing through the eyes of three—Raquel, a black manicurist and nursing student; Teresa, a white history teacher; and Rosa, a trans woman artist—this film is a reflection of the strong movements challenging traditional patriarchal societies worldwide.