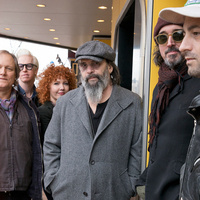 Steve Earle, a man who doesn’t mind telling a story, was talking about the first thing Guy Clark ever said to him. “It was 1974, I was 19 and I had just hitch-hiked from San Antonio to Nashville,” Earle said in mid-Texas-cum-Greenwich Village drawl. “Back then if you wanted to be where the best songwriters were, you had to go to Nashville. There were a couple of places where you could get on stage, play your songs. They let you have two drafts, or pass the hat, but you couldn’t do both.