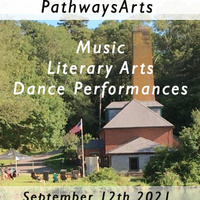 Vocalist Mark Grandfield and keyboard player Jeremy Berlin form a duo for a 40 minute set of songs from the American Songbook ~ Ray Charles, to Tony Bennet, to Frank Sinatra.

Island native Tessa Permar, performs solo: Specially For You - new choreography in response to drastic changes to Island culture she has been observing over the past year.

Jesse Keller Jason choreographs and performs, Slight Chance of Showers, which is meant to provoke hope as we navigate through transitional times. "The sun will always find its way back to the sky, even after the storms." Music by Kate Bush, "Cloudbusting."

Writer and published author Holly Nadler presents a 15 minute excerpt from her new two-women, one-act play, Anne Frank All Grown Up, with an eye of presenting the full-length version (45 minute) later this season on the Pathways stage.

Parking along the slip road from the Vineyard Haven Overlook toward Tashmoo Springs Building.