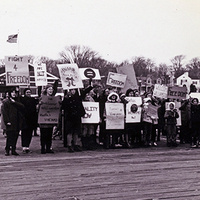 Every great national movement simultaneously rises from, and gives rise to, thousands of local actions. Despite its reputation as an insular world, distant from the mainland, the Vineyard has since colonial times not just reflected, but exemplified, that pattern.

Making Change will trace the local actions by which Vineyarders have participated as both advocates and opponents of change in national movements for social justice. Spanning the two centuries from the early antebellum era to the present day, it will focus on two intertwined causes that continue to make headlines: African American civil rights and Native American self-determination. Placing people and events from the Vineyard in the context of nationwide movements and conflicts, it will explore events ranging from the debate over slavery and the establishment of Gay Head as a town, to the Wampanoag campaign for federal recognition.