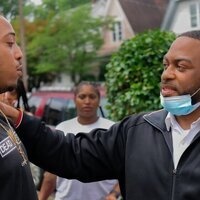 Martha's Vineyard Film Festival: From the Hood to the Holler

This inspiring documentary follows Charles Booker as he campaigns to win the Democratic primary and unseat Senator Mitch McConnell in Kentucky. Uniting people across racial lines, he fights against big money in politics, voter suppression, and systemic corruption in an historically deeply red state.

This event content is powered by the Localist Community Event Platform.
22
33