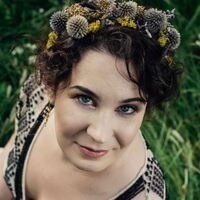 Possessed of an elegant grace, on ‘The Art of Forgetting’ Kyle Carey weaves together resonant threads of Celtic and American roots music into a rich tapestry of acoustic storytelling.

Carey’s own story is as worldly as her music; raised by her schoolteacher parents first in the Alaskan Bush (where she heard Yup’ik Eskimo spoken as often as she heard English), and then in rural New Hampshire. She studied literature in college, and then travelled to Cape Breton Island, Nova Scotia on a Fulbright Fellowship to begin her study of the Gaelic language and its music. Carey is one of those scarce-as-hen’s-teeth Irish-Americans fluent in the language of her ancestors.