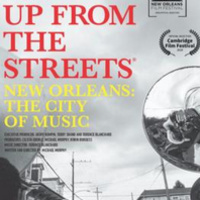 FILMUSIC Festival: Up From the Streets - New Orleans - The City of Music

The history of the city is distinct from any other in the US. The music created here became a powerful form of expression of the joys and sorrows of life. The film looks at the evolution of New Orleans music and how it has reflected the culture and times in which it was created. From the drumming by free people of color and enslaved Africans at Congo Square, to the explosion of musical styles that can still be heard on the streets of the city, the power of music to change lives is evident. Personal reflections by New Orleans' musicians, commentary by national and international musicians along with archival and newly filmed performances, paint the picture of "this city of music". The sounds and rhythms of New Orleans were the foundation of American music and continue to carry the torch of a liberating expression into the future.