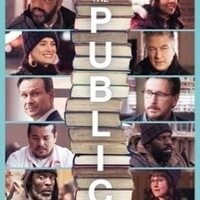 SOLD OUT - Film Screening: The Public

The Public depicts an act of civil disobedience that turns into a standoff with police when homeless people in Cincinnati take over the public library to seek shelter from the bitter cold. This David versus Goliath story tackles some of our nation's most challenging issues,
homelessness and mental illness, and sets the drama inside one of the last bastions of democracy-in-action: your public library.

Admission is free, so please consider bringing a non-perishable donation to the Island Food Pantry.