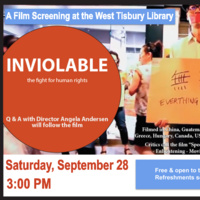 A free screening of the documentary, Inviolable – The Fight For Human Rights followed by a Q&A with the film’s director, Angela Andersen. Inviolable was filmed in China, Guatemala, Turkey, Germany, Greece, Hungary, Canada, USA, Indonesia, and Kenya. Critics call the film “Spectacular - Impressive - Enlightening - Moving - A must see,” and the film has been selected to premiere on the U.S. West Coast in October by UNAFF, the international U.N. Film Festival.