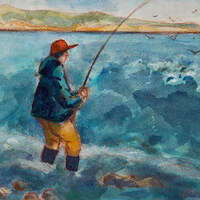 William Blakesley (1921-2012) grew up in Ohio with a penchant for art. During first grade, a teacher recognized his potential and encouraged him to pursue drawing. He did, and went on to draw and paint every day until his death.

After serving in World War II, William went on to teach art, including at Florida State University and Muskingum College. In 1954, William began to visit the Island. He and his wife first worked as house parents at the Youth Hostel in West Tisbury before building their home in 1958. During a sabbatical from teaching, the Blakesleys taught art in the Island’s elementary schools. William opened a gallery on Circuit avenue that he ran for many years, later relocating to Montgomery Square in the Camp Ground after he retired and moved to the Island full-time. For nearly 60 years, William captured the fleeting moments of summer and the faces of both visitors and Vineyarders alike.

This retrospective exhibition is presented in conjunction with a small exhibition The Art of William Blakesley at the Martha's Vineyard Museum.