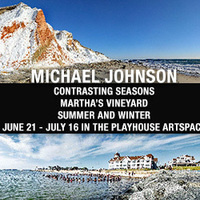 Michael Johnson was born in Harlem and heard his calling to the fine arts at an early age. As a youth he spent many hours in the public libraries and museums studying the works of the great masters of painting, and was motivated by his love of their work. But his odyssey as a visual artist didn’t begin until his late 20s when he decided on a whim to enroll in a community college video production class. It was while attending this class that his earlier studies came to the fore, and he realized that he had some “natural” talent for composition and camera work. Shortly afterward he moved to Martha’s Vineyard Island where he taught himself the art of photography. A full time artist since 2001, Michael currently splits his time between San Francisco’s vibrant Mission District, Martha’s Vineyard and Arizona. This is the 10th season for his eponymously named Michael Johnson Photo Gallery located in Vineyard Haven. His photographic works cover a diverse range of subjects and styles, all focusing on the “oneness” of humanity.

Proceeds from art sales are split between the artist and MV Playhouse.