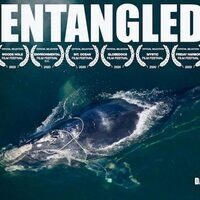 Entangled is an award-winning, feature-length film about how climate change has accelerated a collision between one of the world’s most endangered species, North America’s most valuable fishery, and a federal agency mandated to protect both. The film, by the makers of Lobster War and Sacred Cod, won a Jackson Wild award, known as the Oscars of nature films. It also won Best Feature Film at the International Wildlife Film Festival, Best Conservation Film at the International Ocean Film Festival, and the John de Graaf Environmental Filmmaking Award at the Wild & Scenic Film Festival.

Filmmaker David Abel will join us for a discussion after the film.

An award-winning reporter and documentary filmmaker, Mr. Abel has covered war in the Balkans, unrest in Latin America, national security issues in Washington D.C., terrorism in New York and Boston, and climate change and poverty throughout New England.