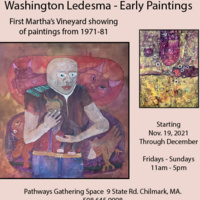 Uruguayan born painter Washington Ledesma, now a longtime resident artist on Martha's Vineyard, started making art at the age of 23 in 1967 Montevideo. His early work consisted of printmaking and painting when he became a student at El Taller Torres-García, the renowned "School of the South" art school established by master artist Joaquin Torres Garcia in the 1940's. In 1973, the year he left Uruguay, settling in New York City to join a community of former art students and teachers of Latin American art hubs who had new fertile ground in the United States. There, he continued to make art and develop his own style, while soaking up the influences of Goya, and others.

Early Works is an exhibition of selected medium to large scale works on canvas produced during his New York years, for decades stored out of sight on Martha's Vineyard. These include: a series of vibrantly colored action paintings from the 70's, also referred to a gestural abstractions, a style where paint is spontaneously dribbled, splashed or smeared onto the canvas, rather than being precisely applied. His colorfields are covered end-to-end in intricate line drawings incorporating religious symbolism, elements from the natural world, exploring subterranean energetic life. A series of portraits from the late 60's into the 70's are seeing the light, most of a personal nature: one, a family portrait of himself with (now former) wife, infant and a pet dog; another is of his ageing late mother, seated, facing the viewer; others depict a military general known for his brutal tactics in stifling free speech.  A few later portraits of female subjects executed in what he describes as a "Belgian influence".

Mr. Ledesma is best for his bright colored ceramics and tribal pop art-like paintings. These early works afford an insight to the illustrious versatility and extent of his decades long career as a working artist in various mediums. He is a full-time resident on Martha's Vineyard, and recently celebrated his 80th birthday.