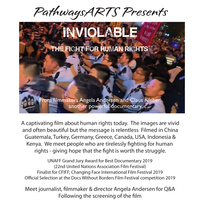 Join us in this intimate setting for a close up and personal experience. "Everyone talks about the rage of despots, much worse is the indifference of the fortunate.”

Ms. Andersen’s Inviolable begins with a reference to the United Nation’s ‘Universal Declaration of Human Rights’ which was translated in every language and Braille. The declaration was proclaimed by the UN General Assembly in Paris, on December 10, 1948, “as a common standard of achievements for all peoples and all nations.”