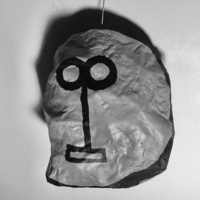 Taking its title from a seminal study of early New England gravestone art, this show of painted papier-mâché forms is a collection of imaginary memorials for a broken lineage. Roughly half of the works were first exhibited at BUOY Gallery, in Kittery, Maine, where Luce’s father spent the last years of his life. The elder Luce was born on Martha’s Vineyard, so this show is a ritual closing of the loop, a culmination of a psychological exploration that the artist embarked on several years ago, and which coincided with his moving to the island for the first extended period of his life. Though his family goes back eleven generations on Martha’s Vineyard, Nathan was not born here, and only spent intermittent time on-island growing up; this tension between belonging and not-belonging is integral to this body of work. It’s an attempt at the impossible task of re-connecting a broken chain, but also an exploration of the effects of growing up with an (either physically or emotionally) absent father; hanging onto the details of a relationship that can be remembered, but also imagining those that have either been forgotten, or never existed in the first place.

Nathan attended Bennington College, where he studied art with Ann Pibal, Mary Lum, and Milford Graves. He is a musician, artist, brewer, and distiller, and is currently the Martha’s Vineyard Program Coordinator for Big Brothers Big Sisters of Massachusetts Bay. His most recent exhibition was Double You Double You Double You, with Baxter Koziol, at BUOY Gallery in Kittery, ME.

This show is on display through February 1st.