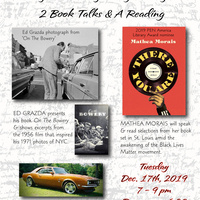 Mathea Morais' new novel There You Are is a coming-of-age story about two friends returning to their racially segregated hometown of St. Louis in the aftermath of Michael Brown’s death, and amid the awakening of the Black Lives Matter movement.

Julia Kidd reads from her prose collection, The Camaro Diaries: an ongoing series of autobiographical short stories about her life.

Ed Grazda talks about his new photo-book, On the Bowery: New York City 1971, with gritty, black-and-white images from his collection. Also, included are two short films on the subject: The Bowery, a 1933 American pre-Code comedy and action film, and the introduction to Lionel Rogosin's film, On the Bowery.

Book signing and conversation with the authors follows the presentations.