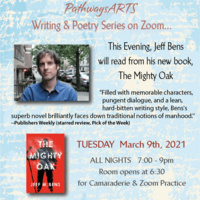 Jeff W. Bens is the author of the novels Albert, Himself and The Mighty Oak (Blackstone Publishing) and director of the award-winning documentary film Fatman's. His short fiction and essays are published widely.

Mr. Bens reads a chapter from The Mighty Oak on Zoom: Tim O’Connor is paid to be violent. People call him Oak. He is a broken machine of gristle and rage. And he has been away from home for too long. He’s called back to Boston by his mother’s death. There he confronts a life he failed to live, a daughter he doesn’t know, and a body that is quickly breaking down. In spare, potent language, Mr. Bens builds a remarkable character from the skates up. The Mighty Oak is a visceral and emotional experience.

The fact of Oak’s physical existence is powerfully rendered, and the bone-deep transformation of his character is one you will not soon forget.