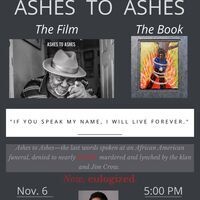 Ashes to Ashes: A Homecoming for the Unburied

The Ashes to Ashes Homegoing funeral service to remember lynched African American was held April 29, 2016, at St. Johns Congregational Church in Springfield, Massachusetts, and documented by director Taylor Rees in a film of the same name. Two days after the service, Michael Kuch of Double Elephant Press recommended to Dr. Whitaker that there was another way besides film to possibly commemorate this event: to create a book.

The resultant book, Ashes to Ashes: A Homecoming Celebration for the Unburied pays homage to the nearly 4000 African Americans murdered by lynching between 1882-1981 and denied their last rites in the United States of America. Six African Americans eulogized by actors during the homegoing service form the centerpiece of the book in separate obituaries with etched portraits. Using this art form, it was possible to capture the pain and despair.

From paper, to bindings, to etchings, Ashes to Ashes: A Homecoming Celebration for the Unburied was made entirely by hand in limited editions of 50 copies; signed by the author. Broadside consists of a list of names of victims of lynching in the form of a tree, with text: As long as you speak my name I will live forever. Copies one through seven have covers with a leather painting by artist Winfred Rembert, a lynching survivor.

The documentary, Ashes to Ashes, about the St. John’s service honoring the victims of lynchings in the south, featured Rembert, the "only known survivor of a lynching." Ashes to Ashes premiered at the Mountainfilm Festival on May 24, 2019, and was named Best Short Doc at the River Run International Film Festival.

In addition to being a writer, Dr. Whitaker is also a physician. “Any time I want to help a patient, the first thing I get is a history,” said Jackson. “[It’s] important for us to get that in order to orchestrate some form of healing.” She said she felt the book “Ashes to Ashes: A Homecoming Celebration for the Unburied” was another way of remembering history, a way to help the world learn from its past.

Email tthorpe@clamsnet.org for the Zoom invite.