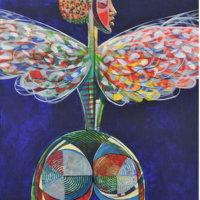 Alejandro Carreño was born in 1962 in Havana. At the age of 16, he won first prize in the Annual Art Contest of the Federación Estudiantil de Ensenaza Media (FEEM) in Cuba. He studied at the Escuela de Diseño Gráfico e Industrial in Havana and received a scholarship to study at the Kunsthochschule Burg Giebichenstein from where he graduated. He subsequently moved to Berlin and launched the 1994 exhibit "Raices," a theme based on the Afro-Cuban culture.

In 1995 Alejandro moved to the Dominican Republic where he records his impressions of Caribbean life in bright acrylic colors. His exhibit "The Flight of the Dreamfish" in 2001 in Santo Domingo, employed a new painting technique using the palette knife as a painting tool. Alejandro's subjects surround us with beautiful metaphors in which the most imperative desires of the human being unite. The life around him makes his brushes and palette knifes move. His paintings deliver impressions of the people, the ocean, and the life under water with refined lines and strong contrasts that create the mystique of his art.

Since 2009 Alejandro has lived and worked on Martha’ Vineyard. And avid diver and fisherman, he depicts underwater scenes in his paintings. His works are in private collections and have been shown in many one-person and group exhibitions in Europe, the Dominican Republic, and the USA.