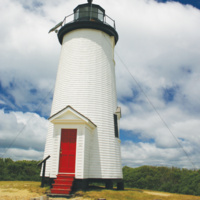 Originally built in 1801 and moved and rebuilt several times, the current wooden structure dates from 1893. It was moved by helicopter in 1985 and again in 1997. It is the most remote of the 5 Island beacons, located at the Trustees of Reservations’ Cape Pogue Wildlife Refuge on Chappaquiddick and not easily reached by car or on foot. The Trustees offer seasonal tours of Chappaquiddick, including the lighthouse.